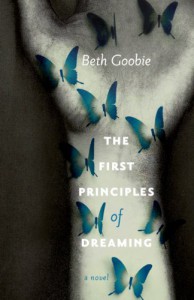 Beth Goobie has written novels for teens before and now turns her hand to a coming-of-age novel which exposes the complexity of a young woman’s shifting identity.

Mary-Eve Hamilton has already experienced some radical alterations in her understanding of her place in the world before readers meet her on the page.

“From that moment on, I knew my mother could not see me. The landscapes we inhabited were too different – what she saw was not what I saw; what surrounded her disdained and shut me out. By haunting her footsteps, I was able to catch occasional glimpses into her realm, but she wandered a part of the mind I could not enter; I stood on the edge of a world she had passed through to, a world I had been refused.”

Had Mary-Eve’s mother simply withdrawn, that would have been difficult enough, but her main source of communion is a religious fervour which distances her even further from her family and the wider community. The effect on Mary-Eve is dramatic and lasting.

Naming in this novel is crucial and Mary-Eve’s transformation into Jez (Jezebel) presents a swatch of conflict for readers, who understand her inner struggle to test and pass the limits she has felt upon her identity. Readers’ understanding grows as more information about the family’s experiences is revealed and challenges force Jez to grapple with questions about friendship, sexuality and faith, while testing the boundaries of her own self.

The style is intense and highly emotive, which reflects the heightened drama of Jez’s age and stage in life. This is emphasized by a series of dream-like passages which are almost overwhelming and work to depict the intensity of the transformation that she is experiencing.

The novel moves at a steady pace and culminates in a fervour of activity which is unexpected  but, in hindsight, seems inevitable. Much of The First Principles of Dreaming is like a bad dream readers might want to shake, but it is a testament to the author’s skill that scenes perhaps-better-forgotten persist and linger in readers’ minds.