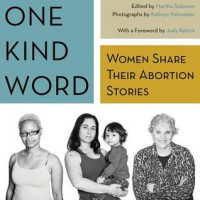 Until Joan Rivers introduced the subject, nobody had talked about abortion on television. She had told the same joke many times, always referring to a friend who’d had 14 appendectomies, because she couldn’t even say the word. (This is discussed in a 2010 interview on NPR’s Fresh Air in June 2010, rebroadcast following her death in 2014.)

In the same interview, she discussed recently listening to a recording of her early work with her daughter, and musing at how it seemed so quaint to contrast what was provocative then with what is challenging now.

And, yet, more than 40 years after Roe v. Wade, a book like One Kind Word (edited by Martha Solomon with photographs by Kathryn Palmateer) still faces challenges.

Sure, major publishers will back works penned by feminists these days, but books of photography about dogs swimming underwater definitely outnumber the copies of One Kind Word in print.

Presented here are portraits and statements by more than thirty Canadian women who have had abortions. It is a slim volume which you are unlikely to find stacked on the national booksellers’ displays, but what it lacks in girth it makes up for in gumption.

These women’s stories range from a few words to a few paragraphs in length, from detailed descriptions of events which informed their decisions to simple, declarative statements.

In summary, they evidence the reality that women of all kinds make this choice; whatever myths one could have believed would be challenged by this array of portraits and narratives.

Copies of this work, in paperback and epub, are available direct from Three O’Clock Press. While I passionately believe in supporting indie booksellers in the community, buying direct from a feminist press not only gets you great books but it works directly towards publishing more great books.

The above comments first appeared on BuriedInPrint.