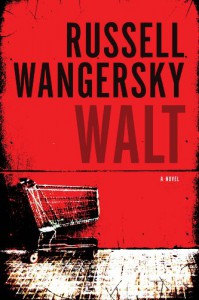 Russell Wangersky grabs readers by the scruff and yanks them into Walt's character, somehow transforming the character-soaked novel into a page-turner.

"I swear I’m not going to become one of those people who goes around talking to myself, dazzling my own constantly appreciative audience of one. I may do strange things, but I do them deliberately."

The details really do matter to Walt; he is very attentive to detail and a skilled observer. But, ironically, readers learn as much about Walt from his acts of observation as we learn about his subjects.

"Her name is Elizabeth, and she has a particular way of talking to you, every word distinct and placed down sharply with a click like Scrabble tiles, her hair piled up grey and precise, and she always looks at your chest, high up toward your shoulder and slightly off to one side, the left side, as if she’d been told that this was exactly the spot where your heart was, and if she looked at it hard enough, she’d be able to divine your true intentions right through the wall of your chest, right inside that lub-dubbing lump of muscle in there. Eyes staring straight through flesh and bone and muscle. Or something like that."

For instance, the description of  Elizabeth is revealing, but primarily for what his degree of attentiveness -- and the details he values enough to share -- relays to us.

But it is not always about the details we can see which matter, but the details which might go unseen. Walt's awareness includes his observations of his own behaviour, but that doesn't mean that question readers might have will be answered.

"There’s a spot, right near one end, where someone smacked a beer bottle down hard enough on the wood to leave a little half-circle of dents. That probably would have been me."

The violence  simmers beneath the surface of the narrative (more often than not). Often times, readers are left to intuit the significance of marks are left behind on various surfaces. In this matter, perspective is key.

"There’s a little shift that happens, and it happens all the time, in all kinds of circumstances. Like your eyes suddenly are working a different way, and you size everything up differently."

Readers might use one of Walt's observations to describe the pacing of the novel: "Momentum is powerful and cruel, and there’s not one single thing that can change it." There is a sense of inevitability to the story as readers turn the pages.

There is some grimacing, some lip-curling: these are not comfortable places to inhabit. But once readers have begun to "watch" with Walt, it is hard to look away.

Thoughts on Walt originally appeared on BuriedInPrint as part of a discussion which included Margaret Sweatman's Mr. Jones.