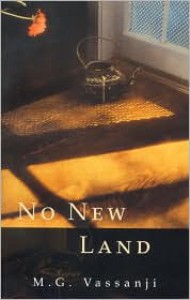 "'When does a man begin to rot?' Gazing at the distant CN Tower blinking its signals into the hazy darkness, Nurdin asked himself the question. He sat in his armchair, turned around to look out into the night. Through the open balcony the zoom of the traffic down below in the valley was faintly audible, as was the rustle of trees. Pleased with the sound of his silent question, he repeated it in his mind again, this time addressing the tower. The lofty structure he had grown familiar with over the months, from this vantage point, and he had taken to addressing it. 'When does a man begin to rot?' he asked. Faithful always, it blinked its answer, a coded message he could not understand."

Nurdin might as well talk to the tower, for all that he feels a sense of connection with those near and far. Since they came to Canada from Dar es Salaam, the distance between him and his wife has increased, and although he is surrounded by others from his homeland who are trying to make a home in Toronto at 69 Rosecliffe Drive, he feels distanced in every way.

Although he believes he was nearly hired to work in the shoe department at Eaton's Department Store, he did not likely make the shortlist, more likely mistook a friendly interviewer's small talk as an indication of understanding and acceptance. When a friend introduces him to Dar es Salaam in Toronto, it's as far from his memories as can be imagined.

And, yet, it is connections with friends from his homeland which ultimately allow Nurdin to begin to carve out something-like-home for himself, though it has little to do with buildings or employment or the core releationships he had expected would further his adjustment to this new land.

The novel is written in matter-of-fact prose and depicts a newcomer's experience in unsentimental tones, nonetheless managing to convey the author's tenderness for his characters. The experience of violence and crime, from within and without the community, is handled deftly, with complexity and sensitivity.