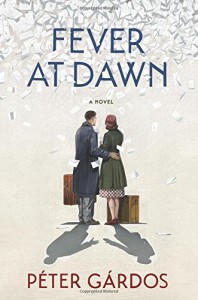 Fever at Dawn by Péter Gárdos began with a box of letters, or, more accurately, the letter-writers, who would become his parents.

"But for fifty years I did not know that their letters still existed. In the midst of political unheaval and the chaos of moving to new apartments, my parents had carted them around without ever talking about them. They were preserved by being invisible." (This quote is from the epilogue.)

The novel is translated from the Hungarian by Elizabeth Szász, the language straight-forward, the cadence uncomplicated, and the tone ever-so-slightly formal.

Sometimes a metaphor shines forth. (Here's a gem: "The occasional Swedish nurse, with her braided hair, crisply starched cloak and bonnet, was squeezed in between them [200 soldiers] like a raisin in a bun.")

Mostly, however, the emphasis is on the broader story, and even though the two letter-writers are at the heart of it, they are not necessarily presented clearly to readers. (In some ways, they, too, are preserved by being invisible.)

Consider this description of Miklós, who has decided that he will send a photograph to Lili, even though he is not satisfied with his appearance.

"Tibor Hirsch, electronic radio technician and photographer’s assistant, hesitated. But Miklós was his friend, and was giving him begging looks, so he put aside his professional pride.
Within five minutes he had worked out how to take a photograph in which my father would be more or less recognisable. He posed Harry in the foreground. In half-profile, at the most flattering angle. A watery sun came out for the briefest moment. Hirsch positioned them with backlight for an artistic feel. He instructed Miklós to run up and down a few metres behind Harry."

Miklós is caught in the image, in a blur, behind his friend. This is highly appropriate, as readers are really only catching a glimpse of him as well, between the lines of letters that he wrote.

But somehow it also captures an aspect of a playful but shy, honest but off-beat man, who, while recovering from the horrors of WWII, in a Swedish hospital, wrote letters to many women seeking companionship, romance even.

When his doctor realises how serious Miklós is taking his pursuit, Dr.Lindholm is not impressed.

“'Last time I tell you, say good bye to her, remember? But even if you were healthy, and you are not, I don’t allow female visitor to male hospital. As a reading man you must understand this.'
'What should I understand?'
'You once mentioned The Magic Mountain? Sensuality is…how I put it…unsettling. Is dangerous.'"

But Miklós is determined: unstoppable and unflappable. He has a poet's heart, and he has something to say.

"The poem soared above the noise of the wheels. Miklós, like a cross between a troubadour and train conductor, marched the length of the carriages. He left half-empty compartments behind him without regret. He had no intention of sitting down. Instead he wanted to form some sort of bond with his fellow travellers, / strangers who were staring in astonishment or sympathy at this passenger holding forth in an unfamiliar language. Maybe some of them could sense in him the lovesick ministreal. Maybe some thought he was a harmless madan. Miklós didn’t give a damn; he walked on, reciting his poem."

Unlike his, Lili's photograph is straight-forward, but her story takes some unexpected turns as well. (Her experience in another Swedish hospital bears some similarities to Miklós' but the relationships between her and her friends are drawn in greater detail, and her prognosis is not determined to be fatal.)

In the wake of a genocidal war, there are deep and devastating themes at work here: freedom and recovery, faith and mortality, loneliness and devotion.

But these ideas are explored in a broader context, so that readers can explore the layers at will.

Rather like Lili's father's suitcase: "Every Monday at dawn Lili’s father, Sándor Reich, trudged down Hernád Street in Budapest carrying two huge Vulkan cabin trunks. In each one, like the layers of an onion, dozens of smaller and smaller cases and bags lay one inside the other."

Fever at Dawn is a simple and short story, but its reverberations cross generations and will attract a wide variety of readers.