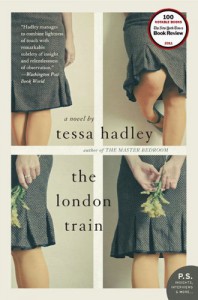 It’s a little like Barbara Pym with trains, this second novel of Tessa Hadley’s: the characters, even those in relationships, feel decidedly solitary. (She has written three other works of fiction but two of them, she explains, were structured as short stories, though they were interconnected.)

Cora resolves to eat better, after her relationship has crumbled, and she shops and cooks purposefully, but sometimes scrapes the meal into the bin afterwards because she has no true appetite.

Paul is living at a distance from his wife, too, but it’s clear that they have been inhabiting rather solitary existences even while married.

These are lonely people and it feels as though simply adding a vicar would take them solidly into Pym-ness.

Cora and Paul have more in common than readers might expect, but...