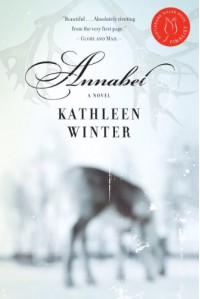 Like Margaret Atwood’s Surfacing and Kate Grenville’s The Secret River, it’s impossible to imagine Kathleen Winter’s Annabel being set anywhere other than the landscape therein.

“In Croyden Harbour human life came second to the life of the big land, and no one seemed to mind. No one minded being an extra in the land’s story.”

But although the characters in this debut novel might be extras in the land’s story, they are at the heart of the story that Kathleen Winter is telling. They are travellers who feel — albeit to varying degrees — the magnetic pull that is described in Annabel’s opening pages.

“A traveller can come to Labrador and feel its magnetic energy or not feel it. There has to be a question in the person. The visitor has to be an open circuit, available to the power coming off the land, and not everybody is.”

In many ways, Treadway appears to be a static character. As open as he is to the power of the land, to the centre of the wilderness, he wants some questions definitively answered. He doesn’t want people to become and unbecome: he wants them to be. His intuitive understanding of the world around him demands that.

His difficulties accepting ambiguity in his child are immediately and readily recognizable. The child's mother, Jacinta, is willing to allow the boy’s and girl’s identity to simply ‘be’, but she acknowledges that that would not be uncomplicated.

But the male and female halves of the child, the boy’s and girl’s identity: they become and unbecome. At times it is a beautiful and, at times, a cruel process. Ultimately Treadway and Jacinta are sidelined: this is Wayne’s story, Annabel’s story.

This novel is written for readers who are comfortable with questions (those who want a tidy resolution, who want all their questions answered will be disappointed). But for a reader, a traveller, with an open circuit, the centre of the wilderness in Annabel is beautifully and intelligently crafted.