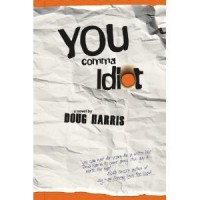 It looks like I took 11 days to read this book, but that's misleading; I spent several days just re-reading the first page (which wholly convinced me that not only could I accept a novel written in the second-person, but I actually wanted to read it) and then I raced through the novel in two days.

Lee Goodstone is the kind of character that I would likely cross the literary street to avoid, and much of the time in which I was in his company, between the pages, I wanted to shake him; still, I could not stop reading his story and I was wholly surprised by how much I wanted things to settle out for him.

Why did I keep re-reading that amazing first page? Because I was afraid that Doug Harris would not be able to sustain either the quirky charm of his narrator (for over 300 pages) and I afraid that I'd lose interest in Lee's experiences; I was wrong on each score. It all worked brilliantly for me. And I don't regret the multiple re-reads of the first page -- it still brings Lee back to me fresh.

The dialogue is terrific, very realistic and it offers the reader a break from the second-person narration so that the device doesn't lose its edge. But Lee's life really does seem to be at a point where he is looking at himself, studying the series of screw-ups; he is ready to talk to himself and set himself straight. Hey, you. So the narrative suits the novel perfectly.

The style is very scenic; it's easy to picture the events unfolding as they are described. This is true of interior scenes, whether in a row-rent apartment or a parked car, but also of the wider setting. Even though I don't know Montreal very well, the city comes alive -- parts of the city you likely haven't visited as a tourist, although there is a brief glimpse of Old Montreal -- and offers a solid backdrop to Lee's life.

But what truly makes this novel stand out for me is Lee's voice and personality. All these mistakes he's making, he's conscious of them and enumerating them; he's regretting them, and struggling to find his way out of the mess they've left behind. It's all very human, and my irritation with Lee was as much rooted in remembered shame about my own remembered messes as it was in good reason. Such a universal theme.

It's true: with Lee, there are truly baffling moments of dumb-assed-ness (and if you've a problem with cussing in books, this isn't the novel for you). But it's also true that there are moments of unsentimental tenderness. So I kept reading so fiercely because I was stuck on Lee. Sure, at times he was a real pain, but at lots of other times, he made me laugh out loud. I think that's pretty great.