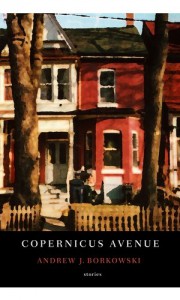 Andrew J. Borkowski's Copernicus Avenue is a series of stories that intersect with each other, just as the rails from Queen Street, King Street, and the Avenue do.

These sixteen tales span decades in time and unfold in Poland, Germany and on and around the avenue (named Copernicus in fiction, Roncesvalles in reality).

One prominent theme is that of identity, both of young characters who are assembling their selves and of older characters who have experienced (or are experiencing) life-changing events that require some re-assembly.

“I am noticing this. Canadian never say they are Canadians. Always, they are saying ‘I am Irish,’ or ‘I am Scottish.’ Why must you always be something else than what you are?”
“I guess that’s because we don’t really know what that is.”
“It’s what I wish to become.”

Thadeus Mienkiewicz is introducing himself in the collection's second story, to a woman. They are walking together in an area of the city which is less familiar to him, the ravines. Were he back on the Avenue, in Little Poland, he would not have to take this step; the community on the Avenue is tightly knit and the Mienkiewicz family is well known. The members become well known to readers as well.

Thadeus' older son, Alexei, appears most frequently. He is sometimes at the heart of a narrative, other times he is a vehicle for someone else's stories. Even those stories with contemporary settings often contain scenes from the past, which add another dimension to the Polish experience. Some of the events recounted are brutal and harsh but they are vitally important to understand, because they are hovering in key characters' consciousness even when their daily lives belie that reality.

"I should have been listening. Stories like Magda’s were all around us, but they were things the grownups whispered after the children went to bed."

For those readers who enjoy interconnected story collections, Copernicus Avenue is a true pleasure. Many of the connections are not immediately clear, which credits the patient and clever reader who enjoys unravelling a good snarl, but there are some core characters who resurface throughout the collection, which will satisfy those who are dabbling in stories but actually prefer to read novels.

For those readers with an interest in Toronto, the collection is resonant with cityscapes. Specific neighbourhood landmarks are discussed (e.g. the Revue cinema, the old TD bank building, the now-abandoned chocolate factory a few blocks over) and city landmarks as well (e.g. University Avenue, the Palais Royale, Lake Ontario).

"Here at the corner of Howard Park, a drugstore opposite him squats under a mansard roof dormered with oval-windowed gables in the Empire style. The treetops that bunch over the surrounding streets are broken by the wrinkled hides of protestant bell towers that tilt toward the Gothic, the Romanesque, the Norman, and the baroque, sometimes mixing all four. About halfway down to the water, St. Bridget’s Catholic Church crouches behind its Corinthian columns and stone portico. They have a thing for Greek temples, these Torontonians."

For those readers who are curious about other cultures, Copernicus Avenue takes its place on the shelf next to books like David Bezmozgis' Natasha and Other Stories (Lithuanian-Jewish-Canadian) and Anthony da Sa's Barnacle Love (Portuguese-Canadian).

There is a diverse cast of characters residing on the Avenue, ages and experiences varying widely, but all are aware of the Katyn Monument beyond the snarl of streetcar tracks, next to the lake. (You can find a short history and some photographs here.)

"At first, I thought he was taking me to the Katyn monument, but he brushed past the cleft bronze monolith with its candles dissolving in the sun. The Sunnyside Bridge vaulted us toward the blue skies over Lake Ontario, then set us down outside the Palais Royale. Around back of the old dance hall, on the sand at the water’s edge, Lech stretched out his arms and offered himself to the place where the blue of the water met the blue of the air."

For some characters, this monument is a pull backwards. For at least one other, who travels to Europe, the monument itself is a symbol of home. Back in the country his parents called home, he finds that borders have shifted, literally, but they have shifted figuratively as well. "I run my hand over the rough hewn edges that remind me of the Katyn monument back at the foot of Copernicus Avenue."

For a visual history of the intersection of streets and streetcar tracks at the foot of this neighbourhood, BlogTO is worth a visit.

For a literary history of the intersection of lives and dreams and losses in the neighbourhood, Copernicus Avenue deserves a place on your shelf.

Most recently Andrew J. Borkowski's collection has been nominated for the 2012 Toronto Book Award.

This discussion first appeared on BuriedInPrint.