Ugly to Start With 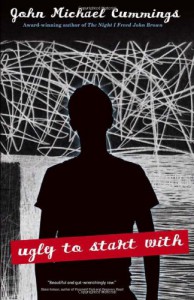 John Michael Cummings' Ugly to Start With offers a series of glimpses of Jason's life, scenes which can be sharp or poignant, or both.

The contrasting emotions that these tales provoke are appropriate; what's messier, what's more contradictory, than adolescence. With the world both too-small and too-big at the same time.

This is captured perfectly in the first tale, "The World Around Us".

In this story, Jason is still young enough to measure time in TV shows.

He is arguing with his mother about the length of time that it takes to drive from one town to another, but it's clear that he is not old enough to have made any of the drives himself (only as a passenger).

But he is old enough to want to be able to offer Ernesto a ride home when he spots him walking along the shoulder of the road as his mother drives past.

While his mother debates whether this is a wise move, Jason tells her to back up the car, along the shoulder, so that the man does not need to walk so far in the wind to catch up.

He is old enough to make demands, but he is not old enough to command that they be respected; his mother refuses to concede to this second demand, and only turns to look at Ernesto once he has climbed into the back seat.

Ernesto is "the new artist in Harper's Ferry". The dynamic in the car reveals that many of the people who call Harper's Ferry home are not accustomed to looking far beyond its borders, either literally or figuratively.

They are used to people (i.e. tourists, mostly) visiting them, but most of them seem more comfortable looking inward rather than outward.

Jason's dad -- one of the most significant characters in the collection -- has a distinct set of rules about his house, some spoken openly, some quietly negotiated.

"Dad might have been the orneriest man on earth, but I had to wonder why he didn’t let people in the house all the time." (from "Two Tunes")

Most of the boundaries in the stories are understood rather than declared; much of the tension surrounds those boundaries being crossed.