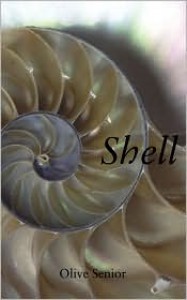 Shell is a slim volume of poems, which the author describes as "sprouting from the sugar cane fields on islands drenched in blood, the former British West Indies".

She began writing them many years earlier, but had a goal of finishing them by 2007, the 200th anniversary of Britain's abolition of the slave trade.

The collection was, indeed, published that year, and its title seems to have emerged throughout that process, rather than as part of an initial vision, so it's remarkable how many of the works fit this motif.

The diverse ways in which this occurs is also evident in the author's notes:

"The sugar cane plant itself is a hard shell imprisoning the gold within. But that shell has to be beaten and crushed to release its sweet juice, the first step in making sugar, a chilling metaphor for the way millions of human beings were beaten and crushed in order to produce it."

Sometimes a poem will discuss an actual shell (like the beautiful cover image).

Other times it may consider the shell of an idea, something inherently intangible.

Sometimes the word may appear in another context entirely, as in:

"The slave ship shell-shock dark
as the night-filled gourd...."

Occasionally the word will appear within another word (as is the case with the section of poems titled "Shelter").

In many instances, and specifically in the longer work which did broadcast the collection's title to the poet, it's important to think about the shell as much for the emptiness that can inhabit it as it is to consider any content.

And, even in this very brief excerpt, there is a glimpse of the author's word-work, the sense that each word is deliberately chosen for sound and sense, that every single letter is playing a role.

There are occasional excerpts from historical works; for instance, this statement is pulled from Auguste Cochin: "The story of a lump of sugar is a whole lesson in political economy, in politics, and also in morality."

Some of the poems reach back hundreds of years, others firmly inhabit the years in which slavery was rampant, others follow which raise questions about the type of labour relied upon after the slave trade was officially abolished.

Black-and-white photographs appear throughout the collection (e.g. artwork, photographs, woodcuts) bringing the verses off the page, making even a casual-poetry-reader feel more comfortable.

The excerpts, the expanse of time, the images: all of these contribute to the sense that this is a work with a broad canvas, which deserves to be considered in a wider context of works. It is more than 100 pages. More indeed.