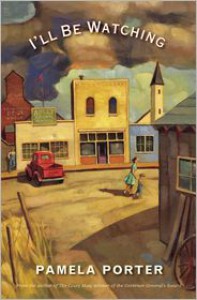 If I said it's like Anne of Green Gables?

Well, then, I'd be lying. Because nothing is like Anne of Green Gables, right?

But I'll Be Watching gave me a lot of the same feelings that reading my battered copy of Montgomery's story gives me.

That's bound to sound hyperbolic, so let me explain.

Pamela Porter's novel opens in October 1941 and introduces readers to the Loney family one by one.

They -- and the folks around them -- are just watching as life unfolds in Argue, Saskatchewan.

The meaning of the title is not immediately clear, but what is recognizable straight off is that the Loney family is going through a rough patch.

Each member is struggling to find a place, collectively and individually, and each is searching for something like home, in the wake of overwhelming losses.

And Argue might be insulating for some (like Anne's Avonlea) but it can be painfully isolating for others. In fact, the line between insulating and isolating is a fine one indeed.

As the schoolteacher observes:
"This town -- how shall I put it -- the welcome
I initially received has dried up
like a leaf in winter."

Remember, it's 1941: a man of German extraction like Franz Lahr faces new challenges in a town like Argue.

It's wartime, but the Depression is still fresh on the prairie. So the oldest Loney boy, Randall, has taken months to find even part-time work on the railroad.

And what of the other Loney children?

Jim is a few years younger, but he too has just left school -- in defiance, because his schoolteacher hadn't heard about the discovery of Pluto, which happened in 1930.

Nora is desperately trying to fill the gap left by their mother's death (a gap that is not being filled, but excavated, by their father's second wife Effie).

And their father, George, has hardly stopped drinking in that long.

So says Elmer Spanner, who is the proprietor of the Buffalo Bar. Elmer doesn't speak/observe much. There are several townsfolk who make only brief appearances in the narrative.

You might think this would fragment the story, but the Loney family is clearly at the heart of I'll Be Watching, so including these other voices/viewers has the opposite effect: cumulatively they create a sense of community in the story.

(More about the sense of community, more about the structure of the novel, the connections to Montgomery's works, and about the characters, and and and...here, on Buried In Print.)
Tweet
9123 BOOKS
Twitter Google Plus Pinterest Goodreads Website