“No, drinking oneself to death took too long.” 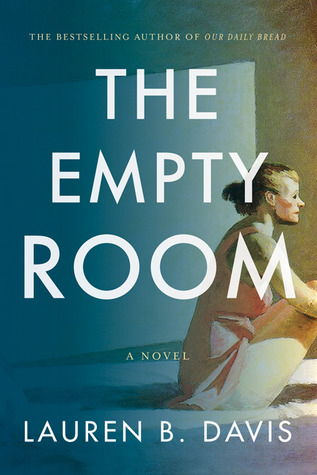 Ironically, Colleen thinks this almost at the end of Lauren B. Davis’ The Empty Room.

But once a reader has resolved to begin, the narrative is so tightly constructed that readers are as caught in the momentum of addiction as Colleen.

If a novelist had been wondering whether she could successfully sustain readers’ interests in Colleen Kerrigan’s struggle with alcoholism, it’s certainly too late to pose the question almost 300 pages into the story.

But, no matter. Because the author has relayed Colleen’s experiences in such a compelling manner that it’s unlikely readers have debated whether to read on.

Yes, each of us has heard (or lived, in or alongside) a story like Colleen’s.

Yes, the story is all-the-more disturbing for its realism.

“She raised her glass to the interesting woman smiling back at her with such confidence and such interesting lips. A woman like that could tackle anything, do anything she chose, be anyone she chose.”

“With the right amount of alcohol, I am a superwoman. I will jump from tall buildings, run like the wind, charm whomever I choose and perform all kinds of magic tricks: get ahead of any lineup, walk through glass, fight anyone, kill a car with my fists.”

And Lauren B. Davis also captures many of the other seductive aspects of alcoholism in Colleen’s experiences too.

“She drank more, and that’s when it happened. She heard, or rather felt, a tiny, but clearly audible click, and when she looked around her at the people she thought she knew, she understood all the things she hadn’t understood before, including that she was perfect and pretty and just as smart as anyone else.”

And as the years pass, not only perfect and pretty, but the beauty to the fairy-tale beast:

“She slid into the version of herself that sometimes appeared when she was just the right amount of ‘tipsy’. Her movements were languid. She ran her finger lightly around the rim of her wineglass. She took tiny bites of her duck, the fork held just so. She brushed her hair behind her ear. Ear laughter trilled, while he guffawed. Her voice was gentle and melodious, while his was loud, the language coarse. She was the beauty to his beast.”

There is something truly enchanting about ”the golden warmth of the fairies-in-a-bottle”.

“That’s what she called them, those spirits who could live in just about any bottle, clever things – wine (the French fairy) or whisky (the Irish fairy) or vodka (the Russian fairy dressed in white furs) or gin (although the gin fairy was Cockney and a bit aggressive), scotch (the thistle-fairy) and certainly Grand Marnier (the fairy with pretty orange wings).”

“They were always there, the fairies, whenever she needed them. Whenever the day called for a celebration (and what day didn’t), whenever she needed a pick-me-up, whenever the world turned nasty and cold and cruel, as it did so often – more often for her than for other people for some odd reason. […] The fairies waited for her, whisking her away to a far better world. Come away, O human child! To the waters and the wild.”

But, yes, you know it’s going to turn:

“She was just at that point when she could see behind the masks people wore, could see down to what they really thought and felt and understood the judgments they passed – and it was always so ugly, so wounding.”

And, yes, it turns more dramatically than that. Much more so.

But the sharp pleats in the narrative are unexpected, standing in contrast with the messy unravelling of Colleen’s daily life.

(Truly, this is why I was spellbound by The Empty Room; some other specific elements held an appeal for me, but it is the crafting of the individual segments – and the sophisticated joinery between – that mesmerized me. Although I had to re-read great gobs of the novel just to figure that out.)

And the Yeats and Hans Christian Andersen and the myriad of other literary references?

Yes, that’s unexpected too. But Colleen Kerrigan — drunk and sober and in-between — still dreams of being a writer.

(From William Blake to Annie Proulx, from the Rubáiyát of Omar Khayyám to Charles Dickens, from Ray Bradbury to Gabrielle Roy, from John Donne to The Hobbit: Colleen is one well-read woman. I love that she quotes the “song of mehitabel” as readily as Ambrose Bierce, is as likely to pick up Eudora Welty as George Orwell. This is just a hint of the allusions and quotations.)

Whether at an employment agency or in a Davisville shop (one’s near the corner of Yonge and Eglinton and the other just south of there, if you’re taking a tour, and you could, because the geography is accurate), whether passing the Robarts Library or the  Chick ‘n’ Deli, Colleen is a bookish character.

“She still had her writing. She should be writing this very minute. She would get her journal and begin immediately.”

And, with that, comes a propensity for solitude. It’s difficult to find the line between that and isolation. And this is another way in which Colleen’s character holds a universal appeal. (Edward Booth Loughran’s “Isolation” embodies that.)

For who has not felt desperately alone in a struggle.

Colleen has an on-again-off-again relationship with a man who is increasingly unavailable. Her friend Lori who is distancing herself from the spiral. Her neighbor Helen is agoraphobic, and has panic attacks. And Colleen’s mother is institutionalized at Spring Lake Place. She feels isolated, but the fairies offer a kind of company.

“Why did the walk back home feel so short? She always imagined she’d managed to get farther away than she had. The ground she’d gained in an entire morning and afternoon was lost in the brief hour it took to retrace her steps.”

What is truly remarkable about The Empty Room is how Lauren B. Davis not only pulls readers into Colleen’s loneliness but the way in which the steps of the journey are so intricately designed that the reader is unaware of the complex route travelled.

When I retrace my steps, I can see that I’ve been further with Colleen than I ever would have expected.