One of the most charming elements of the collection of letters between Blanche Howard and Carol Shields is the extreme bookishness of it.

While reading A Memoir of Friendship, I was constantly making notes and, in the end, more than half of these were about the books that the two women read, their thoughts on them and the delightfully recognizable way in which talk of one book spiralled into the talk of another (and another and another...you know how it goes). Blanche Howard's novel Penelope's Way possesses the same charm. Penelope Stevens has a lot of reading years behind her (she is seventy), and references to the books and stories she recalls are scattered throughout the work.

Reading Kim as a girl, she became entranced by the life of a mystic. She learned the harsh lessons of illicit love from Anna Karenina and Emma Bovary. She refers to contemporary works like John Updike's Rabbit series and Couples and classic writers like Balzac and Montaigne, and to short works like Snow White and a Walter de la Mare poem. Talk of the Slough of Despond brushes up against musings on Horatio's dilemma. It is perfectly bookish.

The settings are specific (for instance, Capilano College, North Vancouver, Langdale ferry) and frequently emphasize the characters' relationship with the natural world, like Whistler Mountain or a particular backyard.

One of my favourite details is Penelope's daughter's home, which is in a "a sturdy two- storey structure nestled within the aromatic boughs of a ninety- year old red cedar". But the way she describes, for instance, Vancouver, is also striking: "a cement ribbon of modernity".

Nonetheless, the heart of Penelope's Way is its relationships and characters, Penelope's friends and her children, Brenda and Gordon, who are navigating the world from their midlife years.

The novel seems to reach beyond itself, quietly alluding to other tales. One can't help but think of Penelope of Old, patiently waiting for Odysseus. (Though one has the sense that Blanche Howard's Penelope is less likely to simply wait around now.)

And in the realm of Canlit, readers might recall the geese in Martha Ostenso's classic work, and the scene in Ethel Wilson's Hetty Dorval, when reading this passage:

"When geese in winter flee this country in their precise V- formations, she explains to [grandson] Jason, perhaps they see themselves as plodding along like starfish, with all the time in the world to line themselves up with the left wing of the goose ahead. No, she doesn't know how fast the hearts of starfish beat, but if the camera effect relies on heartbeats it must be very slowly indeed."

Penelope often inhabits these contemplative moments. It is a true pleasure to see a woman-of-a-certain-age on the page, and to recognize her balanced characterization of folly and wisdom, curiosity and maturity, which make her live and breath in print.

She has a way of expressing things which often provokes a smile. "Everyone has her own private devils, and if there is one thing Penelope has learned it is that devils have to be dealt with on a per-devil basis."

And although she is pragmatically aware of the limitations that she faces as the years pass, she is equally determined to face those while avoiding the pitfalls whenever possible.

"Penelope checks herself before this thought can take hold; she doesn't intend to fall into the ageing- trap of discounting today's glories for those of the old days."

No, Penelope's view of the world is more complex than that.

"Penelope often thinks she was born fifty years too soon. The longing, the frustration, the sexual prohibitions whose mythic proportions put pleasure on hold. Sometimes permanently."

She is ever-changing and evolving. 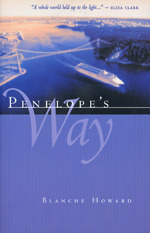 "That woman is not to be found anywhere in the emotional detritus of Penelope's past. All she is now is a memory, a curiosity, a being to whom Penelope attaches a slight aura of shame, an outgrown primitive who once bore Penelope's name."

Penelope is still working out the meaning of life.

"But she has work to do. Who survives, who should feel guilt, who owes whom, where has that person gone. Weighty matters. It may take her longer than she expected to work it all out."

And she is not claiming to have any definitive answers, simply reevaluating past and present.

In doing so, writing is tremendously important.

"That is what words do, she sees it now. They define the past and project the past into the future, they set up expectations; they may, in fact, be self- fulfilling. But most importantly, they are the pathways by which each of us seeks to describe our lonely, disparate, personal universes."

Penelope's relationship with words is as important as her other relationships at this stage in her life, but she places a tremendous value on friendship too. (Not hard to see the letter-writer in the novelist here: I can't help but want to revisit A Memoir of Friendship now.)

"Oh what a friendship that first one is! The fulfilment in discovering a kindred spirit, a being who thinks as you do, who can confide her longings and terrors and meet instant resonance and understanding, who loves to build forts as much as to play with dolls, who brings an imagination that reinforces and supplements your own. Little girls feel a bonding for years with such a friend, a different kind of attachment than that afforded by parents."

Novels written by writers who also feel this kind of attachment to the books they read - and to the written word more generally - are often amongst my favourites; I wholly enjoyed Penelope's Way.