Kathryn Kuitenbrouwer's All the Broken Things (2014) If she were to tell the story again, it would be a little different.

You might wonder how, because Bo's story seems all-of-a-piece, powerful just as it is, at once archetypal and unique.

"No one knows. But one thing is true. Whenever someone retells a story, bits get added and bits get lost."

Does this mean the story is broken?

Is there some pure version back at the beginning?

And what of the hero's responsibility to the tale?

The hero in All the Broken Things is Bo.

Readers meet him on the novel's first page.

“'But, children, really, what makes a hero a hero?'

'He’s someone who loves so much, he does valiant deeds,'” says a schoolgirl in Bo's class.

Our boy-hero loves his sister, Orange, and his mother, Thao (Rose), and his bear, Bear. He loves so much.

And he performs valiant deeds.

But there is a question of how valiant those deeds are.

Sometimes the deeds appear valiant to an audience, but the performers are aware that they are not.

For instance, Bo wrestles bears on the carnival circuit; it is a charade - a choreographed and tightly controlled exercise - which entertains and awes those who believe it is wrestling.

Sometimes the deeds do not appear to be valiant, and there is no appreciative audience to suggest otherwise.

For instance, he dutifully and loyally cares for Orange - whose exposure to Agent Orange in utero has dramatically impacted her appearance and capacity - but only his mother is aware of this responsibility and she, too, simply accepts it as a necessary element of everyday life.

For readers, Bo is valiant from the beginning. The novel's opening scene is charming, simultaneously revealing both courage and innocence. Sensorily rich (particularly in touch and taste), the situation is simple and the language uncomplicated, and Bo takes shape as a hero.

But with and without an audience, Bo is an actor. Literally, in the school play - in which he is cast as the hero, Orfeo - and sometimes he acts like someone he is not in other ways (whether fighting a neighbourhood bully, or hiding his affection for a girl).

This is an important question: what is a performance, and what is real.

Even Bo isn't entirely sure what is real. Some of the horrifying events of his young life seem like a dream. Or maybe he just wants to think they were a dream.

"And now they’d lived here for years, and it was like a dream where some things were real but you were never sure."

To complicate the matter further, there is a distinction between what one chooses to see and what one pretends not to see.

Sometimes it is difficult to see anything at all.

"The ocean housed another world you couldn’t see unless it came to the surface, or where the water was very shallow."

Sometimes the trees get in the way. Just as Orfeo enters the underworld, Bo enters the undergrowth; he disappears into the forest for a time, when someone he loves is missing. (The Greek myth of Orpheus and Eurydice has many versions, but this seems to be consistent.) As in the mythic story, people Bo loves can vanish.

"Always between them there were questions, but never were these questions asked. For Bo it was as if the air thickened in the space between his thought and his voice."

There is a sense of Bo caught between two states, a sense of enchantment at work."There was a charmed waiting between them."

The hero, Orfeo, is known for charming people with his music. He is capable of greatness.

When Rose reads the story, she is puzzled: “It says: ‘I rode into a rock, and went three miles or more.’ How can this be? How can a person ride into a rock?”

In many ways, Rose, too, is pretending. She adopts another name. She is suffering in ways that she does not articulate to her son. She represents herself in a particular light to a man who offers the family a degree of security.

She looms large in Bo's world as his mother, but in the wider world she holds another shape. "She did not look small; she looked smaller than that. She looked like a drawing of a person." 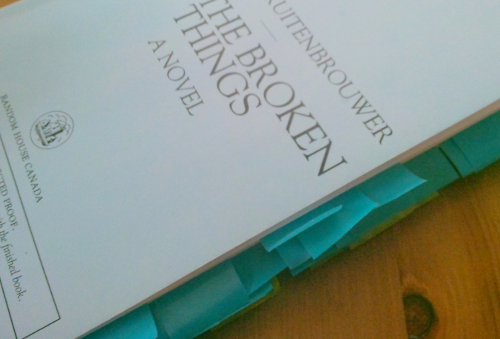 Drawings and photographs, carnivals and plays, legends and histories, wooded pathways and midways, pools and caves: they all contain stories, hint at other versions.

How do we see the people in these stories, identify the heroes and the monsters?

"If a person thought that humans only came in one shape, then they were fascinated by these [Other] beings. It was as simple as that."

In some ways, All the Broken Things, could be seen as exploring the idea of difference. But it is, simultaneously, an exploration of the shared.

Fighting, gesturing, swimming: sisters and bears alike do these things. And a call for valiant deeds might be a call for simple acceptance. A fracture is not necessarily a break.

Should the broken - the Other - be reshaped?

"It was the shame Teacher conveyed, by trying to fix things. He wanted to shout that these things were just broken. He wanted her to understand about the pride of broken things."

Or should the Other simply be allowed to be?

“'The world is perfect in its own way. As perfect as anything.'”

Perhaps there is a risk in either case: one might exploit, but one might also overlook possibilities.

Perhaps they are merely versions of the same story. Perhaps all the broken bits of some other story have simply been reassembled.

Kathryn Kuitenbrouwer is ringmaster and dancing bear, orchestrator and performer. All the Broken Things is enchanting and painfully real, truth dressed in a charade.

*This review originally appeared here, on Buried In Print.