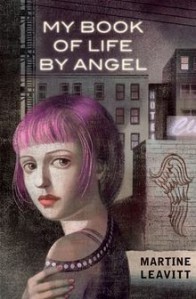 Teen readers today can turn to stories like Heather O'Neill's Lullabies for Little Children and Martine Leavitt's My Book of Life by Angel (2012): well-written, multi-layered, beautiful and challenging stories about the experiences of women and girls walking the street.

Martine Leavitt explains that the characters in her novel are invented, but "inside my made-up story is much that is true".

Some common experiences are outlined, but "[e]ach girl's story is different".

That's Serena, but it fits for Angel as well. The language is common and familiar and unsentimental, which brings the emotional resonance of the story to the fore.

And not that the more general topic isn't harrowing and disturbing (abusive relationships and child prostitution), but The Book of Life by Angel plays out on the eastside of Vancouver, before Robert Pickton was arrested and charged.

Following the story, there is a list of the missing women of Vancouver's Downtown Eastside, collected in 2007, which reminds the reader that Angel's experiences might be made-up but these experiences are certainly real.

"He said, Angel, do you love me?
Just do this for me, for us-
soon we'll be taxpayers,
we'll have the neighbours over, we'll volunteer.
You with me, baby?"

Similar to Baby's experience in Heather O'Neill's novel, Angel finds an outlet in her writing. (She finds another kind of inspiration in the story, too, but to discuss that would reveal a significant spoiler.)

"I got my notebook
and figured out
when you want to write a poem
you don't know where it might go.
It's an act of faith to write a book of you,
to believe a poem
is something you could do."

This aspect of her experience is one of the major reasons why this book is easy to recommend; the devastation and destruction has a counterpart.

There is no tidy, satin-bowed resolution, but Angel possesses a strength and determination which makes her story resonate beyond the page.