Running the Whale's Back It's a great title isn't it? It's actually drawn from one of the stories in the collection, Samuel Martin's story, and it's a perfect fit. You'll see why, when you read the introduction to the colection. 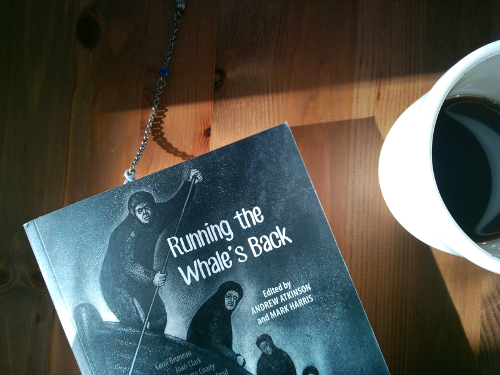 From the opening pages, readers realize that the anthology's editors have done their homework. The stories included in this anthology have been previously published, so it's possible that even random readers who are well acquainted with the fiction of Atlantic Canadian writers might have previously read all of these tales.

But the introduction reveals that the editors possess a broad familiarity with and passion for the literature of Atlantic Canada which extends beyond the pages of this collection.

Not every story in the collection is discussed in detail and, yet, the introduction mentions some works and authors which are not included: the territory is vast.

And readers who enjoy the idea of new terrain opening up on the page will appreciate the sense of having a curated collection to explore with the intimation that there are countless other volumes waiting in the wings.

Readers who are likely less to pick up a collection of stories when there is a novel at hand will be pleased to discover the work of many novelists herein as well.

The collection begins, for instance, with a story by Michael Crummey (whose Galore made my list of favourites for that reading year).

His lyrical prose nestles up with the like of Sheldon Currie's story, which contains a series of haunting images, including a young widow on her bed juxtaposed with a broken man on a hospital gurney.

This is not, however, simply a collection of stories in which characters sing ballads and drink, against a backdrop of mill whistles and ocean waves; masses and denunciations abound. This is a collection rooted in faith and doubt.

Even this, however, is not a theme easily defined. In Joan Clark's story, readers discover that what someone might interpret as a mark of salvation is another's mark of damnation.

Sometimes there is overt religiosity in a story:

"Stones had been changed to potatoes in Saint-Joseph-de-la-Mer! It needed to be published in the Diocesan News. A Subscription should be taken up to build a Cathedral, just like in Sainte-Anne-de-Beaupré." (Clive Doucet's "Miracle Potatoes")

"Longing is nothing but the candle flicker of thought, of an absence, a faith that cannot be sustained, which will erode into the gravel of any relationship. Love is not ignition of gasoline, but the slow turn of bone to oil. He knows this and yet he longs with a desire as large as any conversion." (Michael Winter's "Stay the Way You Are")

"“I’m not a great theologian and in those times you weren’t going to win anybody with reason. But I was a pretty fair scrapper in my day, so I coasted on that and tried to use it to advantage.” (Michael Hennessey's "The Priest and the Pallbearer")

"She lifts him up and the nest sticks to him, then falls into the water and begins to float downriver. The bottom of the nest is missing, which makes it look like a crown of thorns." (Deborah Joy Corey's "Discovery")

This is not a theme which would normally draw me to a work, but GooseLane's reputation overcame my own doubts on that count; in that sense, you might say they have given me reason to reaffirm my own personal belief system, a belief in the power of story.