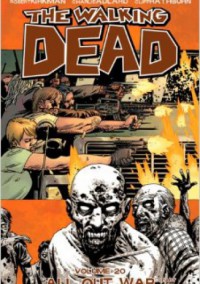 Reading Notes: I think this book is what a lot of readers assume the entire series is like: death and dying, violence and abuse, chaos and devastation. But, in fact, as the introduction to the first volume states, the series as a whole is focussed on character development and on long-term commitment to the narrative rooted in how people respond to extreme stress and strain.

In this volume, however, the conflict erupts between bands of survivors, and it is just as the title suggests: all out war. Hard to handle. Especially because Kirkman does not spare his darlings: characters die. And because this is the twentieth volume in the series, even minor characters have appeared at the margins of the storylines often enough for readers to feel a certain attachment, which intensifies the loss.

I'm glad this was titled Part One, so that I didn't expect anything like a resolution at the end. It's not a cliffhanger, but the conflict is ongoing. As a reader who has trouble sticking with series (always tempted to try the next one instead of completing), I'm surprised that my interest is so solidly sustained here, but I'm definitely keen for #21.